For the past few years on Remembrance Day, I’ve skipped the crowds at the main cenotaph downtown in favour of the homespun but equally heartfelt ceremony at the striking Japanese Canadian War Memorial in Stanley Park. Given the history of suffering Japanese-Canadians endured in their adopted land, I find it moving in a way that is different from the equally affecting remembrance at Victory Square.

The memorial is in a lovely secluded spot surrounded by trees in their dapper fall colours. Erected in 1920 on the anniversary of Vimy Ridge, after a successful fund-raising drive, it commemorates the 54 Nikkei who volunteered to fight, then died, for a country that denied them the vote. Such was also the racism in their home province that they had had to travel all the way to Alberta to sign up, after bigoted local recruiters refused to accept them as soldiers fit for the Canadian army. 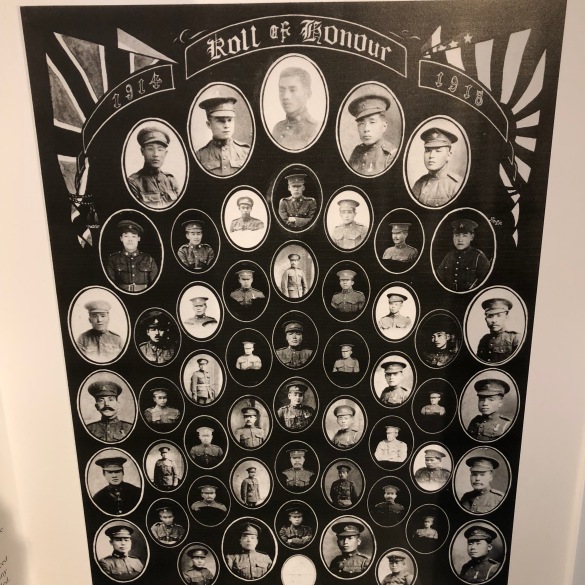 “Without the franchise, they fought to prove they were Canadian, “ ceremony moderator Gordon Kadota told us. Another 150 or so Nikkei enlistees did survive the carnage. But not until 1931 was the government shamed into giving these few ethnic Japanese a special dispensation to vote, their willingness to shed blood for Canada notwithstanding. “Lest we forget,” intoned Mr. Kadota.

He went on to recount how Japanese Canadians were subsequently branded “enemy aliens” in their own land, interned or indentured, had their assets confiscated, and, even after World War Two ended, were banned from returning to British Columbia for another four years, or given the option of repatriation to Japan, That “offer” was taken up by many embittered Japanese Canadians. “It was like giving a condemned person a choice – gun or rope,” Mr. Kadota said: He added: “It’s often called ‘deportation’. It was not deportation. They were Canadians. It was the exile of a race.” After each mention of these events, he repeated: “Lest we forget”.

Of course, the soft-spoken but forthright moderator did not lose sight of the purpose of Remembrance Day. He noted the price paid by Japanese Canadians in conflicts in Korea and Afghanistan, adding again, “Lest we forget”.

Before the laying of wreaths, Mr. Kadota explained why he felt it necessary to include the dark history of Canada’s wartime treatment of Japanese Canadians as part of Remembrance Day.

“We are here to pay tribute to all the men and women in uniform,” he said, “but what I said before is a story that must be told over and over to every generation. Lest we forget.”

In common with Remembrance Day ceremonies elsewhere, numbers have been growing at the Stanley Park site. As many as 300 people ringed the Memorial’s small enclosure, a heartening contrast to the 10 or 15 observers who often showed up in the past.

There was an added poignancy to this year’s observance, along with being the 100th anniversary of the end of World War One. “Since the last one, we have lost four of our veterans,” said Mr. Kadota.

Yutaka Kobayashi was one of them. His father Ryoichi had been wounded at Vimy Ridge. That service on behalf of Canada didn’t stop authorities from shipping him to the Tashme internment camp in the Kootenays during World War Two. Disheartened by his treatment at the hands of a country he had fought for, Ryoichi went back to Japan in 1947. Despite all that, while living in Japan, his son Yutaka joined the Canadian army four years later to fight in Korea. (Sometimes I feel we don’t deserve such people.)

And I was personally saddened to see that Minoru (“Min”) Yatabe was among those who didn’t make it to another Remembrance Day. He passed away a mere month short of Nov. 11 at the age of 96. I was privileged to have met “Min” when he journeyed here from Toronto to attend ceremonies at the Japanese Canadian War Memorial in 2012. He was as lovely and cheery an individual as one could ever hope to encounter, still full of life. “Min” had been part of the small Japanese Canadian contingent who set aside the way their race had been treated and volunteered for overseas duty in the Pacific against Japan. The hidebound Canadian army had to be pressured to let then enlist by the British, who saw their language skills as invaluable.

After meeting this remarkable Canadian, I wrote about him here. https://mickleblog.wordpress.com/2013/11/10/minoru-yatabe-canadian-veteran/

Although he arrived in Asia too late to see action before Japan mercifully surrendered, he was invaluable to the British, interrogating each surrendered soldier in their own language about possible war crimes. At one point, an officer told him to head out into the jungle to accept the surrender of an entire company. He stood up in a jeep, reviewed the defeated soldiers and returned the salute of their Japanese commanding officer, before the formal surrender. I asked “Min” if he hadn’t felt a bit weird, being ethnic Japanese, himself. He replied: “Of course not. They were Japanese. I was Canadian.”

RIP, Minoru Yatabe. A wonderful man and a great Canadian. Lest we forget.